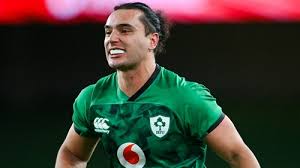 Ireland’s hopes for silverware in 2021 were brought to an end after a strong France side came away with victory in Dublin.

The boys in green started as they meant to go on with another impressive lineout steal.

A ping-pong game occurred between both sides as they looked to assert dominance early on.

An impressive kick from Ireland winger James Lowe led to another lineout steal courtesy of last week’s An Focal Man of the Match Tadhg Beirne.

A stunning kick from French fullback Brice Dulin attempted to turn Ireland’s early momentum on its head as it bounced out in Ireland’s 22.

The Irish reacted strongly but a lineout error gave France an opportunity to lead the game which fly-half Mathieu Jalibert was unable to take advantage of, missing his first kick of the tournament

France’s defence looked as strong as it did last week with Les Bleus stifling the Irish in the first quarter.

The Ulsterman rectified his error a minute later to get the game’s first points after 20 minutes.

France messed up another lineout when Irish captain Iain Henderson forced a knock-on and conceded another penalty after winger Keith Earls was tripped up by France’s Bernard Le Roux, earning the lock ten minutes on the sidelines.

A disappointing Ireland set-piece brought an end to their drive.

France showed their hosts how to be clinical soon after surviving Ireland’s efforts with captain Charles Ollivon getting over the line after a defensive error by Ireland number nine Jamison Gibson-Park.

Jalibert made no mistake with his second kick of the game and gave his side a 7-3 lead.

Anthony Jelonch was punished for not wrapping and Ireland were able to get near the French 22 once again as Le Roux returned.

France’s scrum showed their strength at the end of the first half, causing Cian Healy to concede a penalty which Jalibert duly took advantage of, giving the Six Nations favourites a seven-point lead at half-time.

Ireland were lucky at the start of the second-half after hooker Julien Marchand broke through their defences on the Irish 22 but a communication error between scrum-half Antoine Dupont and lock Paul Willemse killed the move.

Ross Byrne replaced Billy Burns after being deemed in need of a head injury assessment (HIA).

Iain Henderson and Cian Healy were temporarily replaced, needing their own HIAs after Ultan Dillane and Ed Byrne after colliding.

The Irishmen were let off the hook once again after Arthur Vincent rushed a pass out wide which could have led to a second try for his side.

Lowe’s kicking saved the side after they struggled to get out of their own half, but an unsafe lineout attack ended any chance of Irish pressure.

Ireland showed a lack of communication with a string of unimpressive plays and errors.

France orchestrated some smart play with Dupont, Jalibert and Fickou conducting the symphony.

Lowe made a second defensive error in two games and allowed winger Damian Penaud to cross over for France’s second try of the game but another Jalibert miss soured the taste of the French movement.

Replacement hooker Ronan Kelleher made an instant impact after capitalising on a fortunate bounce to score his first international try.

Ross Byrne added the conversion to bring the game within five and Healy and Henderson returned to the pitch.

Ireland grew back into the game after their rub of the green and Ross Byrne showed his confidence, choosing to take a 44-metre kick without consulting with Henderson and then slotting it over with ease.

The men in green continued to apply pressure with their newfound confidence evident but mistakes continued to haunt the side.

Bordeaux’s Jalibert missed another penalty, with the ball banging off the post for the second time in the match.

Ireland continued to fight for a result and impressed at the breakdown, successfully turning France over and looked to move the ball into the French half.

However, Shaun Edwards’ well-drilled defence pushed the Irish back and won the ball in the red to bring the game to an end.

France improved their claim for a first championship in 11 years with a second win for opposition in Dublin since 2012, stopping Ireland from taking their winning streak at home against Les Bleus to five.

They look unstoppable so far in 2021 and, with most other teams stumbling, could run away with the silverware this season.

The game against Scotland could possibly be their toughest in the tournament but they will still enter the game as favourites.

Ireland’s hopes of a return to the top of European rugby are all but over after losing their first two games in the Six Nations for the first time.

Andy Farrell’s side could pick up their first win upon their return against Italy after next week’s break but may find the final two weeks of the tournament just as frustrating as the first two.