A 14-men Ireland fell to a sturdy Wales side due to some individual errors. 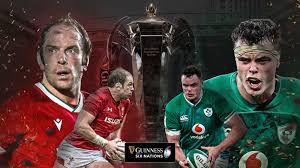 Wales and Ireland faced off in Cardiff in their opener for this year’s Six Nations campaigns.

Wales were hoping to start strong after a dire 2020 and were given the chance to do so after flanker Peter O’Mahony came in from the side.

Wales full-back Leigh Halfpenny took his chance and got the Welsh on the scoreboard.

Ireland looked to respond instantly but a messy Iineout win ended in a knock-on and stopped their drive inside the 22.

Wales flanker Dan Lydiate’s return to international rugby ended after just 12 minutes when he went down without contact and was unable to carry on.

O’Mahony was sent off a minute later for foul play after shouldering Tomas Francis in the face during an attempt to clear out.

Ireland won another Wales lineout with Paul O’Connell’s influence obvious throughout the game, but Leigh Halfpenny made it 6-0 from afar after a high tackle by fly-half Johnny Sexton.

New Wales defence coach Gethin Jenkins’ impact was instant with some stellar Wales defence halted an Ireland drive that was camped in the Welsh 22.

Sexton got Ireland into the game with a long-range penalty.

Sexton tied the scores after George went off his feet in the ruck.

Lock Tadhg Beirne finished off a move started by another Irish lineout win, with inside centre Robbie Henshaw and openside flanker Josh Van Der Flier gaining most of the metres in the build-up.

Sexton finished his half three-from-three from the tee and Ireland ended the half with a 13-6 lead.

Wales started the second half as the better side and George North got them their deserved points after a lovely offload by flanker Josh Navidi.

Halfpenny missed the conversion to leave his side two points off 14-men Ireland with 30 minutes to go.

Leinster star Tadhg Furlong got his first minutes after a year out through injury and Henshaw was replaced by fly-half Billy Burns temporarily.

Ireland’s defence was once again stretched and Gloucester wonderkid Louis-Rees Zammit put the ball in the corner to give Wales their second try and the lead.

Halfpenny made amends and widened their lead to five.

Tadhg Beirne was controversially penalised for coming in at the side after replays showed he had got to the ball first and the decision led to Halfpenny putting the game beyond a score as well as reaching the 100-point mark against Ireland over his career.

Sexton walked off looking rather uneasy after a strong hit and was replaced by Billy Burns for the rest of the game.

Burns brought the game back within a score with just over eight minutes left on the clock.

However, Ireland could not break down the organised Wales defence and Ireland had to settle for a losing bonus point after Burns missed the crucial kick for touch.

Wales will have a week to prepare for Scotland who look to have improved since the Autumn Nations Cup as well and have their star back in Finn Russell.

Ireland will welcome France to the Aviva Stadium, hoping to put a dent in the favourites’ grand slam hopes.

Andy Farrell’s men may have to hope for a miracle to get their Six Nations campaign back on track or it could fall apart.