Scotland announced themselves as the surprise package this year with a dominant display against England to retake silverware at Twickenham. 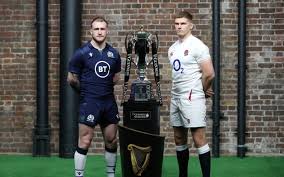 England and Scotland faced off in their Six Nations opener, this year’s match doubling as the game 150th Anniversary of their first meeting.

England wore a special-edition kit and almost got the first try on the special occasion but could not capitalise on scrum-half Ali Price’s mistake.

Scotland were the livelier of the sides and put pressure on the England defence early, earning their first points on the board, slotted over by fly-half Finn Russell on his return to the Scotland XV.

Scotland survived an England journey into their 22 with their established defence standing strong.

England’s pack got the better of their other half in the first scrum of the game however Scotland continued to pile pressure on the English, eventually winning the next scrum in the process.

The Scots continued to look for gaps with Russell kicking into space and debutant Cameron Redpath impressing with some adventurous runs at inside centre.

However, England’s defence weathered the storm albeit with a lot of penalties given away.

England No. 8 Billy Vunipola was binned 23 minutes in after a high tackle, conceding England’s ninth penalty of the game.

Winger Jonny May covered for Vunipola in the scrum with Scotland camped in their 22.

Russell and winger Duhan Van Der Merwe came close to getting the opening try of the game, but the bounce proved too much for the South African national.

The pair made amends a minute later with the latter getting the ball over the line to give Scotland an 8-0 lead.

Fly-half Owen Farrell got England their first points on the board after 33 irritating minutes while Vunipola returned to the pitch.

Price once again felt the pressure from England and the ensuing messy play led to Farrell adding another three on the board.

Before the kick was taken, the television match official (TMO) spotted Russell deliberately attempting to trip up England’s number nine Ben Youngs and referee Andrew Brace sent him to the sin bin.

The second half started with Scotland on top, regardless of being a man down.

England’s defending was desperate and eventually gave way in the form of a penalty, with Russell returning in time to give his side a five-point advantage.

Russell’s quarterback-like kicking continued to stress the England backline out but failed to add three more from the tee.

A monster 65-metre kick by full-back Stuart Hogg and consistent Scottish pressure caused more panic for England, but the British defence held out.

England burst into life momentarily and Scotland had to force replacement scrum-half, Dan Robson, into an error to withstand it.

Scotland pegged them back once again, but Hogg missed another chance to take the game beyond a score.

The Scots’ defence held their ground with Jonny Gray working hard to turn possession over.

A Jonny May blooper ended all hopes for England as Scotland camped themselves in their half until the end.

Scotland regains the Calcutta Cup after a year without it, now having held it three times in the last four years.

They will be looking to dominate the rest of the Triple Crown nations as they did with England today and rival France for a grand slam.

In contrast, England must rethink their game plan. Their dull, defensive rugby was exposed by Scotland today.

They are a far cry from their World Cup semi-final performance and are only regressing further.

Both teams still have a lot of work to do but one exceeded expectation today and may finally be fulfilling their potential that they have teased fans with for half a decade.