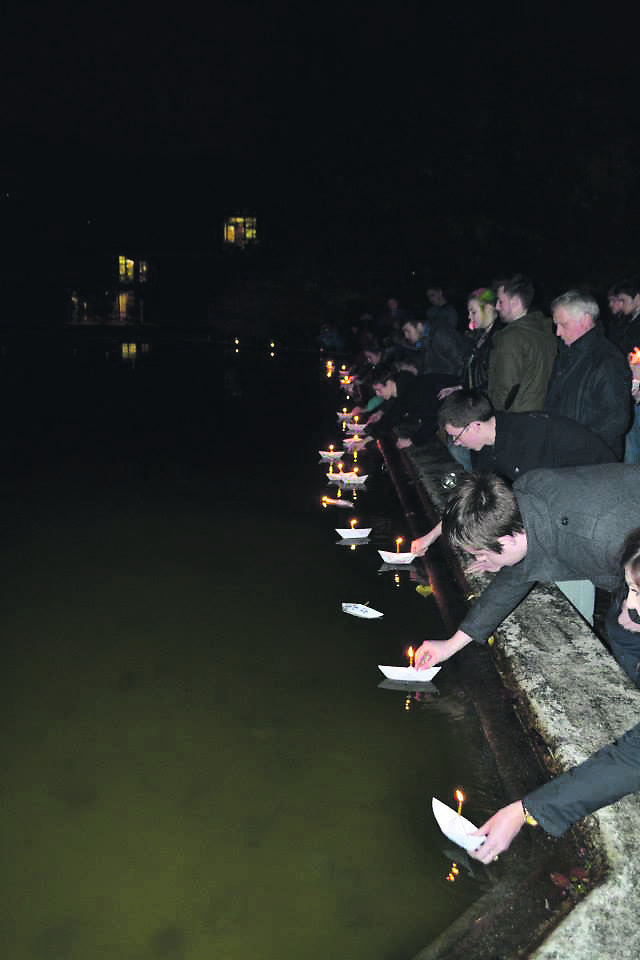 Pitch black, a crowd amassed and stood in silence. The fountain’s water remained still behind Plassey House. The birds that usually cawed above were missing and the usually student busy grounds were empty, bar our small collective.

A few minutes passed and the crowd was solemn as if inertia had befallen us all. As more gathered the silence only stuck longer and the heaviness of the air only grew. It was genuinely peaceful as everyone’s eyes looked around the dark, eerie yard appreciating the rarely seen beauty of a still Irish night.

When we were sure everyone was there Marielle Xuereb (Out in UL President) calmly spoke a few words about the event and then we all gathered closer as a single guitar started playing Knockin’ On Heaven’s Door.

We all collected a paper boat with a candle and began lighting them, sharing the dwindling flames and protecting them from the wind which had picked up. Knockin’ On Heaven’s Door ended and Ilyana Keohane transitioned to Youth by Daughter.

We waited for each other to reach the fountain’s edge and then, in unison, began placing the boats into the water. They managed a few inches and most fell over or were extinguished by the wind. We lit the rest for those who didn’t make it and set them down into the water, they drifted around and some managed to stay lit, a few crashed and would set each other ablaze, burning up the paper body and leaving a small crumbling pile of ash.

Usually the sceptic, even I felt at peace there – there was a certain atmosphere over the grounds and the fragile boats seemed to possess a poignant parallel to the lives many of them represented. I don’t ever recall UL ever feeling so silent and tranquil, it was noticeable, odd and an experience I hope to remember long past my college days.

A bucket was passed around towards the end and Out in UL raised a seemingly modest Є70 for Pieta House. Marielle spoke a few words again and stayed till the end to help clean up.

She was pleased with the success of the event and said: “It was a very touching event and we do believe that the message of mental health and talking about this too often taboo topic was felt by everyone present.

“The sending out of the boats was a significant moment and you could see by everyone’s reactions and the sombre tone of the whole event that it was impactful. Even more so that we raised money for Pieta House which we will be presenting to them and hopefully we can repeat the same again next year with a return of the Light for Life event.”