An Focal’s Caleb Brennan examines why Juventus and AC Milan are still involved in the much-maligned Super League. 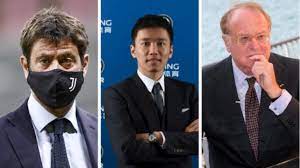 The Football world was united for the last few nights as the announcement of the European Super League was made.

The new midweek tournament format was cooked over the last six months from a dozen of Europe’s biggest clubs. The announcement came at huge furore from pundits, fans and even footballers.

“I don’t like it one bit, and hopefully it doesn’t happen,” said Liverpool midfielder James Milner after his side’s 1-1 draw in Leeds on Monday night.

The uproar of fans and players led to the six English clubs eventually faltering and starting the withdrawal process.

Other clubs such as Atletico Madrid and Inter Milan have since joined this process leading to the suspension of the European League.

However, according to the President of Real Madrid and the inaugural President of the Super League Florentino Perez, the league is “not dead” but “on standby” and not all the clubs are looking to withdraw.

This still poses questions for Serie A and Italian football as two of its biggest stakeholders are still involved with the league.

Juventus president Andrea Agnelli who is Vice-Chair of the league is a major player in the formation, and although AC Milan has released a statement apologised to their fans, they never claimed to withdraw stating that “change is not always easy” in a vague statement.

Italian football is in a dire state due primarily to the covid-19 pandemic. Clubs are haemorrhaging at gates in empty old stadiums and the books are reflecting this.

It was only on 15 April, that seven Serie A clubs including Inter and Juve, signed a letter of no confidence against Serie A President Paolo Dal Pino. The reasons cited poor management over league’s TV rights sale which would lead to 1.65 Billion euros cash injection.

The big six in England could afford to leave the Super League as the revenues for the Premier League are much more sustainable.  For Juventus, AC Milan and the withdrawing Inter Milan this is not the case.

So, it is no surprise why the Italian big boys are looking for alternative forms of revenue. Agnelli has made no quips in the past from turning away from domestic efforts to focus on building the Juventus club into a European institution and brand.

According to the New York times, in the conference call with Serie A Clubs, Agnelli, with the use of an expletive, showed little care if Juventus remained in Serie A.

The same meeting in which President of cross-town rivals Torino Urbano Cairo branded the Juventus head as “Judas”.

The question remains about what will happen to the Italian clubs. The Italian Federation has said that any sanctions will not be applied to the ongoing season.

Calls are being made by Italian pundits, managers, and fans to have the teams penalised with point reductions and possible regulations.

The last time the Italian clubs faced consequences this serious was the match-fixing scandal in 2006 which saw 30 points each taken off Lazio, Fiorentina and Milan while initial champions Juventus were relegated to Serie B.

Although necessary, the results of these punishments are still felt throughout the Italian game and Calciopoli proved to be the final strike that knocked Serie A of its perch.

A league without the three biggest players is not an attractive prospect to buyers.

Unfortunately, this will still be an issue if the Super League goes ahead with Juventus and Milan dropping out, so what does the Italian FA do?

The future of the Italian game rests on a knife–edge with this announcement and the kingmakers from Zhang at Inter Milan, Elliott Management at AC Milan and, most importantly,  the Agnelli family at Juventus hold all the cards.