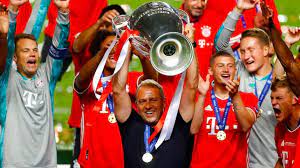 Hansi Flick’s time at Bayern Munich is set to come to an end when the season finishes.

The German manager announced his wish to leave the club after their 3-2 win away to Wolfsburg on Saturday.

He will end his time at Germany’s most successful club with a Champions League trophy, a DFB-Pokal, a Club World Cup, a DFL-Supercup and possibly two Bundesliga Meisterschales.

Flick has amassed an incredible 2.57 points per game across 82 games, with four games left to add to that impressive stat.

But how has he achieved so much in so little time?

The former Germany assistant manager reinstated veteran players such as Thomas Muller and gave others a chance full-time like Alphonso Davies after Niko Kovac’s departure.

All these players fit together into a dominant 4-2-3-1 setup that Flick uses to let all his players’ shine.

It proved much more successful than the sometimes stale 4-1-4-1 under Kovac.

Neuer, now back to his best after a tough period, offers world-class goalkeeping on front of the back four and has been ever-present in the side.

The main back four is made up of Pavard, Boateng, Alaba and Davies who, while prone to defensive errors, are talented enough to hold onto their spot.

Pavard, the more defensive-minded of the two full-backs, tends to stay close to the pair when they have the ball, while Alphonso Davies pushes up the field, adding an extra passing option in midfield.

Bayern’s two ball-playing centre-halves offer a unique advantage to the German side – both Boateng and Alaba’s ability to play out from the back allows Kimmich to remain in midfield when building up play.

Pavard, although less inclined to make daring runs like his opposite, looks to move the ball forward too, making Bayern’s back-three when looking to progress the ball a very fluid collective.

Wingers Leroy Sané and Serge Gnabry, and full-back Davies can receive long balls and attack quicker because of this.

Gnabry and Davies are a dual-threat on the left with the former tending to cut inside while Davies stays out wide and offers an overload on the left flank.

New addition Sané stays wide and receives passes from either Kimmich or the three who sit back.

The 26-year-old is used to pick out Thomas Muller and the other forwards much higher up the field as well as his midfield partner.

The 52-time German national dominates Bayern’s passing statistics – over the last year, the star maintained an average of 8.63 progressive passes per 90, 0.54 assists per 90 and has completed 4.71 shot-creating actions every game.

He is the most important cog in the Bayern machine and his work allows others to thrive.

The team’s ball-dominant system has seen the side lead the Bundesliga in possession with an average figure of 60.5%.

Goretzka drives forward often to add a third central threat for the opposition defenders to deal with and leave space for either Lewandowski or Muller to receive the ball.

These runs can also be crucial when the ball is near the opposition box – the industrious German becomes a goal-scoring threat in these scenarios, with eight goals and nine assists to his name this season, despite suffering from injury and coronavirus throughout the campaign.

Thomas Muller has seen himself receive many passes from Kimmich under Flick and has been racking up the assists with Robert Lewandowski on front of him, providing nine out of his personal haul of 20 for the Pole.

The Polish striker has been on fire for years at Bayern and has taken his game to the next level with Flick’s fully functioning attack.

The 32-year-old has netted 77 times in 69 appearances since Flick’s upgrade to manager in November 2019.

His instinctive movement inside the 18-yard box and perennial danger have decimated sides across Europe.

The Ballon d’Or favourite rounds off a world-class starting XI once held back by Kovac.

A deep bench at full fitness includes Kingsley Coman, Lucas Hernandez, Javi Martinez and German wunderkind Jamal Musiala who have all played their part this season.

Flick has transformed a side that looked on the decline under their former boss, revitalising legends and planting the seeds for new ones.

The shackles came off for Bayern when Flick became the head coach and they became the world’s best side once again.

Bayern can only hope it stays that way long after Flick’s departure.