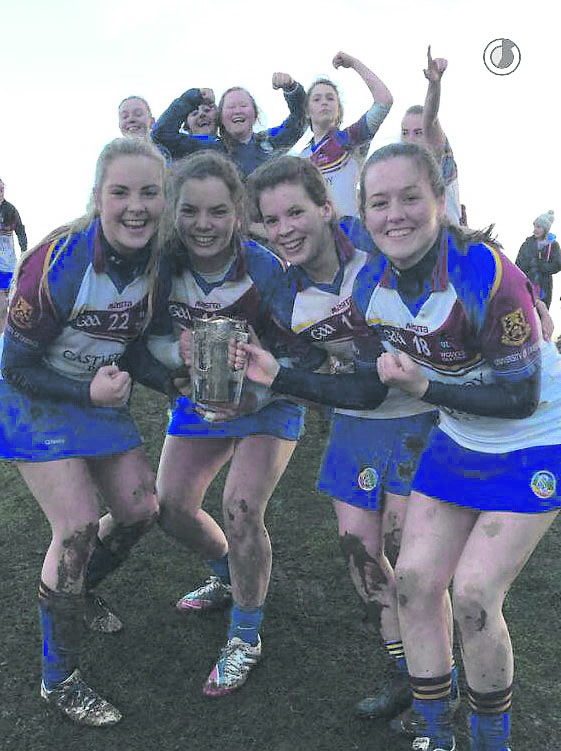 Our Ashbourne camogie team treated fans to a nail biting finish in their final against UCC on Sunday 14th February in Gort GAA Club, Galway. After overcoming reigning champions WIT in the semi, a mouth-watering fixture against UCC promised to serve up a cracker of a final.

The game got off to a slow start with both teams showing some expected nerves in the opening few minutes as both registered wides. Patrice Diggin opened UL’s account for the afternoon scoring 3 frees from various angles before UCC registered their opening score. UCC’s star player Katrina Mackey scored a goal shortly after, leaving the Leeside College with the narrowest of leads.

Amidst a short but vicious hailstone shower, Aoife Keane, one of four dual players on the panel, pointed expertly off the left before another Diggin free put UL a single score ahead. Sarah Fryday, goalscorer in UL’s mammoth win over 2015 winners WIT on Saturday in Ballyhaunis, then struck to the net before UCC hit 2 points to leave 2 points between the teams at half time, UL 1-5 UCC 1-3.

The second half provided as much entertainment as has been seen on any field so far in 2016. Kerry star Patrice Diggin opened the scoring once again for UL with a free, canceling out a UCC score. Through Diggin and Keane, UL opened up a four-point lead which was shortly reduced back to 2 by some fine long-range shooting by the UCC forwards.

With 16 minutes left, Niamh Ryan, who bravely played the final with a severe injury to her arm, saw Clare woman Niamh O’Dea move into space. O’Dea caught the sliotar and drove at the UCC defence before popping the ball to Sarah Fryday who made no mistake and buried it past the helpless UCC custodian. Both teams traded scores before Mackey’s second goal brought life back to the at Mardyke club. A great clearance off the goal-line by Ciannait Walsh ensured UL kept a 3-point lead (2-10 vs 2-7) with 7 minutes remaining.

Hannah Looney then netted to draw the teams level. After a difficult game on Saturday and the battle against UCC, the impact of substitutes was always going to be crucial. Ciara Murphy and Emma Buckley both entered the cauldron with 6 minutes remaining replacing the excellent Niamh Ryan and Aoife McGrath respectively. Diggin and O’Dea put UL two points clear with 2 minutes of normal time remaining.

As the game was entering injury time, UCC really began to apply the pressure on the Shannonsiders goalmouth. UCC won a free 25 metres out in the first minute of injury time which was deflected out by a combination of UL hurleys. The ball was hit back into the square and landed straight into Mackey’s hands who hammered the ball to the net to put UCC ahead by the bare minimum 4-7 to 2-12. Those who travelled to support the girls from UL clad in white were distraught and thought they were about to experience similar heartbreak to 2015. However, they had a plan.

UL won a free on the touchline on the 45m line. Everyone knew it was to be the final play of the match; 25 bodies landed in towards the UCC goalmouth before Player of the Match Patrice Diggin landed the ball in. It was completely fitting that the inspirational figure of team captain Laura McMahon would rise highest to flick the ball to the net, leading to surreal celebrations both inside and outside the wire! UL successfully negotiated the final remaining seconds of the final to capture the Ashbourne Cup 2016, allowing Laura McMahon of Clare the honour to collect the cup on behalf of her outstanding teammates and management.

Otherwise, it was an ultimately successful week for UL teams with our Sigerson Cup footballers qualifying for a semi-final for the first time in 19 years. Our Fitzgibbon Cup hurlers lost out to NUIG by a point during Week 3, but had done enough to qualify for the quarter final last week against CIT.

Our fresher 1 hurlers qualified for the quarter finals while the fresher 2 hurlers are in the semi-finals after both teams defeated UCD. Our fresher 2 footballers lost out to CIT in the quarter final by a goal while our intermediate ladies footballers got their season off to a winning start over DkIT. Our intermediate hurlers beat local rivals LIT to reach the munster final while our junior hurlers overcame CIT to reach the semi-finals.

Week 4 saw our senior hurlers play CIT for a spot at the weekend while our senior ladies footballers have a home tie against Trinity. Our fresher 1 and 2 hurlers are out in their respective championships while our Lynch cup ladies footballers play their second round and our junior hurlers take on UCD in the semi-finals. However, the highlight of the week will be our Sigerson Footballers. Be sure to get out and support all our teams if you can!