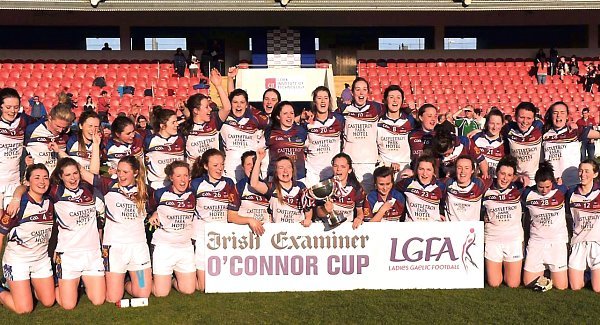 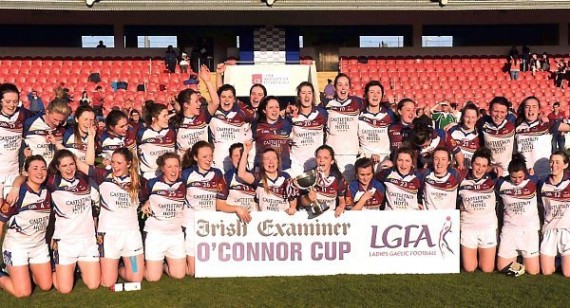 Following a great weekend of football in CIT Cork, UL were crowned O Connor Cup champions for the second year with a comprehensive victory over cup favourites DCU on a score line of 3-16 to 0-9. This was the culmination of hard work, dedication and team work by those both on and off the field.  A penalty by Roisin Leonard in the first half and two goals by Aine Tighe in a four minute spell early in the second half sealed the fate of the O Conner Cup for 2015 it was returning to UL.

Both sides were littered with inter county players and according to the victorious captain Niamh O Dea “It all boiled down to hunger and work-rate,”  The game opened with both sides determined to get the upper hand and after four minutes the sides were level at four points each.  The game changed in UL’s favour, when they were awarded a penalty after Katie Murray was adjudged to have fouled in possession. Roisin Leonard confidently put the ball in the back of the net and settled all the UL nerves. UL identified DCU’s three most influential players in the semi-final as being Laura McEnameny, Lindsay Peat and Brid Sullivan. Laurie Ryan subdued Peat and with Jennifer Grant and Lorraine Scanlon commanding the midfield area ably assisted by Niamh Richardson and Julia White: UL had a strangle hold on the game. Going in at half time 1-9 to 0-6 it was all to do for DCU in the second half. Five minutes into the second half UL keeper Elaine Murphy produced a great save to deny Brid O’Sullivan a goal for the Dublin side, denying one of the few goal chances they had throughout the game.

This was a victory straight off the training ground according to O Dea “All year we focused on our forwards turning over the ball and pressuring defenses. Our in-house sessions were harder than any competitive game we played”. She said. This was evident in Tighe’s first goal when DCU’s Laura Mcenaney and Sinead Greene were shepherded out to the stand side of the field by four UL defenders with no where to go Sinead Greene was djudged to have over carried and UL were awarded a free.  Jennifer Grant drilled the ball into Niamh O Dea who found Aine Tighe on the edge of the square and she gave Tarpey in the DCU goals no chance. UL now lead by 2-9 to 0-6 with seven minutes gone in the second half. UL further increased their lead with another goal from the boot of Leitrim’s Aine Tighe.   Sarah Rowe responded with two quick points but they were to be the final scores for DCU. Three points for Roisin Leonard and Niamh O Dea from frees combined with two from play by Claire O Sullivan and young Aileen Wall from Waterford kicked six unanswered points to complete the sixteen point victory. Edel Murphy in the UL goal kept a clean sheet in the final and in doing so UL did not concede a goal in the entire tournament,

This was an all round team performance and UL captain Niamh O Dea picked up a well deserved player of the match award: “This caps off a tremendous four years at Limerick, We lost semi-finals in 2012 and 2013, but we have now established ourselves as the top ladies football college.” the victorious captain said.