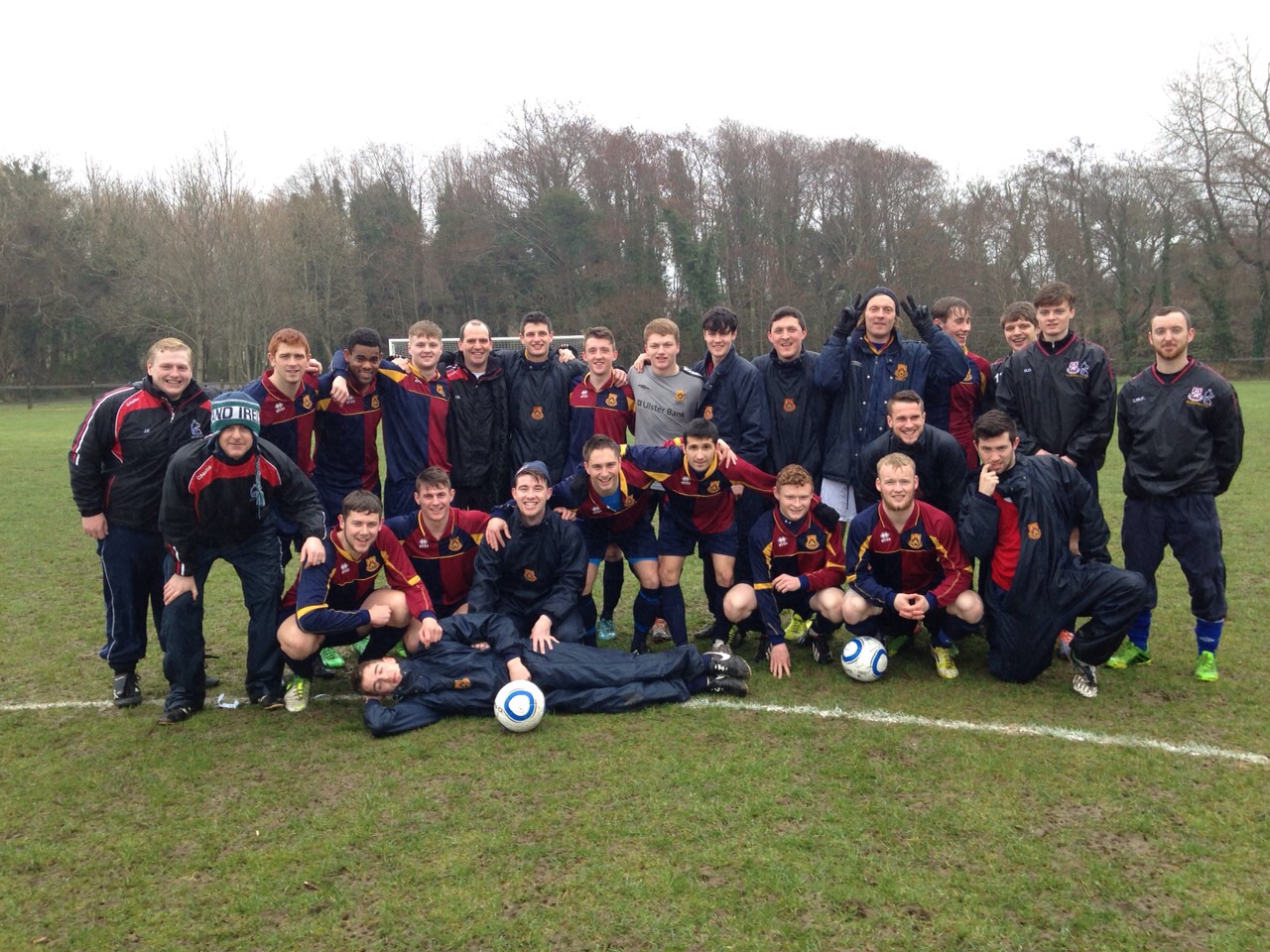 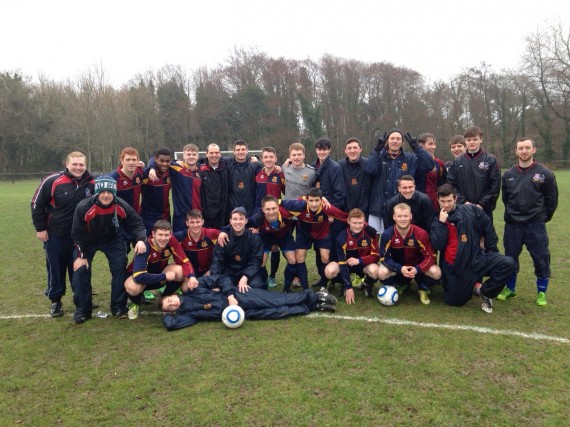 The 2015 Collingwood Cup was held in NUI Galway from 23-26 February. In its 101st year, the Collingwood Cup is the premier soccer competition for Universities in Ireland. The University of Limerick squad travelled to Galway in a confident mood hoping that this would be the University’s year to finally win the Collingwood for the first time. Fresh off a runners-up finish in the national 1st Year competition, the Harding Cup, UL hoped their mix of exciting young players along with their experienced and talented senior players would be enough to make history and win the 101st Collingwood Cup.

UL started the game well and created several early chances. After 5 minutes, an Eoin Roche corner was met by the head of Conor Maguire but his attempt smashed off the crossbar. In the 19th minute, UL won another corner which was delivered by Roche. This time Shane Harrington met the ball with his head and made no mistake in hitting the target and put UL one to the good. In the 28th minute, another Eoin Roche set piece fell to Jonathan Hannafin who crossed the ball from the left hand side. UL right-back Conor Maguire was on hand to finish the chance and put UL 2-0 up. Maguire was on the score sheet again minutes later as UL capitalized on yet another Eoin Roche set piece. Roche delivered a corner and Maguire rose highest to win the header and put UL into a comfortable 3-0 lead. UL were 4-0 up at half time after a Colm Murphy through ball from midfield found its way into the path of Oisin McMenamin who duly applied the finish. There was a slight scare after 55 minutes as Coleraine got one back from a set piece of their own. A dangerous ball was delivered to the back post from a free kick and Coleraine were first to the ball to bring the scoreline back to 4-1. UL then shut up shop and it wasn’t until the 82nd minute that the game had its 6th goal. This time the goal came courtesy of Brian Donovan. Garbhan Coughlan broke down the left hand side and unselfishly squared the ball to Brian Donovan who slotted home for UL’s 5th. Coughlan found himself on the score sheet minutes later as he picked up a through ball from midfield and kept his cool to slot past the keeper. The game finished 6-1 to UL who progressed to the quarter-finals.

UL faced Trinity College Dublin – who had dispatched of Royal College of Surgeons 2-0 in their round one game – on day 2 of the tournament. UL started well and the first chance of the game fell to Gavin Dillon after an Eoin Roche through ball. Dillon motored into the Trinity box and from an awkward angle smashed the ball into the side netting. After just 4 minutes, UL found themselves behind. After a ball was turned over in midfield, Trinity found themselves with numbers on the right hand side of the pitch. They capitalized on this advantage and got a shot away which beat UL keeper Andrew Walsh. UL regrouped well and fought their way back into the game. UL should have been level twenty minutes later when a Jonathan Nelson goal was ruled out for offside. UL came in at half-time at 1-0 knowing a big performance would be needed to unlock this Trinity defence. UL dominated for large portions of the second half but struggled to find the breakthrough. As the minutes ticked on, UL threw the kitchen sink but the resilient Trinity managed to see out the match and keep a clean sheet. The match finished 1-0 and meant UL were knocked out of the Collingwood Cup.

The UL camp, despite being bitterly disappointed with their Collingwood exit, knew that this loss meant they dropped into the second tier competition, the Farquhar Cup. UL were to face Queens Univeristy Belfast (who lost 2-0 to UCD in their Collingwood quarter-final) in the Farquhar Cup semi-final. The game started off at a good pace with UL perhaps having the better of the first half play. The teams came in scoreless at half-time. It took just 6 minutes of the second half for the deadlock to be broken. An Aidan McGrath pass found Gavin Dillon on the left hand side. Dillon preceded to carry the ball and put his shot out of the reach of the Queens keeper to put UL 1-0 up. Just a minute later, UL were two up. A punt down the middle from UL keeper Peter Healy found Oisin McMenamin whose excellent first touch allowed him to carry the ball into the final third and score. The pace of the game slowed following this with UL looking more likely to score a third rather than Queens find their first. The game was wrapped up in the 81st minute after an excellent move down the right hand side. Jack Byrne nutmegged an opponent and found a pass to Oisin McMenamin. McMenamin then pulled the ball back to Garbhan Coughlan who slotted home. The match finished 3-0 and UL progressed to the Farquhar Cup final.

UL met DCU in the Farquhar Cup final which was played on Mervue United’s 3G astro surface. UL started well and struck first in the 22nd minute. Gavin Dillon powered down the left wing and rifled a shot in the top corner giving the DCU keeper absolutely no chance. The score remained 1-0 for the rest of the half and UL came in at the break happy with their first half performance. A formation change for DCU which saw them move to three at the back seemingly back-fired as UL scored two goals in quick succession minutes into the second half. The first came in the 48th minute from Andrew King Cowpar. A Colm Murphy free-kick saw the ball played to the back post and drop to Paudie Walsh. However, Cowpar gave a call and Walsh obliged by leaving the ball for him. The 6ft6 centre half produced a piece of exquisiteness that wouldn’t look out of place in the Russian ballet; Cowpar produced a flick from the left hand side of the penalty area which sent the ball over the keeper’s head towards the far post and eventually nestling in the side netting of the DCU goal. UL went 3-0 up two minutes later as DCU’s high line was exposed. A Joe Collins over-the-top through ball fell to Oisin McMenamin who lobbed the progressing DCU keeper. UL looked to be moving towards a comfortable victory and had several chances to go four up; however it was DCU who struck next in the 75th minute. The UL defence was caught napping and DCU broke down the right hand side of the pitch and scored – what UL will feel – was quite a soft goal. DCU started piling on the pressure and got rewarded again in the 82nd minute. A super strike from distance from the left hand side was enough to beat Peter Healy in the UL goal and put DCU within a goal of bringing the tie to extra time. DCU had two clear cut chances to bring the scores level but just weren’t quite clinical enough. After a nervy ending, the referee blew the final whistle and UL were crowned Farquhar Cup winners.