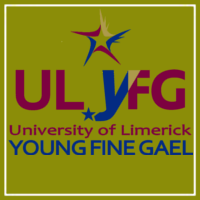 On Wednesday the 7th of October the UL Young Fine Gael group visited Leinster House. We left Limerick at 6:30am.The tiredness and crankiness soon left us and was replaced by excitement. Especially the new recruits who hadn’t been to Dáil Éireann before. We arrived in Dublin around 9:30am. We had breakfast and began our walk to Leinster House. Thankfully, we all wore comfy shoes.  There we were met by local Deputy Kieran O Donnell TD and his parliamentary assistant showed us in to Leinster House and got us signed in.

We were met by John Lohan, a former UL student who is now a private secretary to An Taoiseach and he gave us a tour of Leinster House, Government Buildings and we even managed to have a look at An Taoiseach’s office and had a chance to meet Taoiseach Enda Kenny before he took Leaders Questions.

Later the Branch met with Minister Charlie Flanagan’s personal assistant Sarah Kavanagh. She gave us an insight into her job and then kindly brought us on a tour of the Department of Foreign Affairs. After that we headed to the Dáil Bar for a few beverages.

At 7pm we headed to Trinity College for a panel discussion on the refugee crisis. The panel speakers included Jody Clarke from the United Nations Refugee Agency, Hugh O’Connell the political editor of thejournal.ie and Alan Shatter TD. The talk was informative and interesting as it is such a topical issue for Fine Gael at the moment. It was important for us to know what is going on and how we can help to resolve it. After the talk we headed back to the Dáil Bar with TCD YFG.

We got the 11:15pm bus out of Dublin and arrived back at the Stables at almost 2am. Although it was a long day it was enjoyed by all and we’re already looking forward to next year. Special thanks to John Lohan, Regina Doherty TD and Kieran O Donnell’s personal assistant, Ciara. Thanks also to Charlie Flanagan’s personal assistant, Sarah Kavanagh and Department staff for their help and hospitality throughout the day. A big thank you to Kieran O Donnell TD for organising the visit for us.