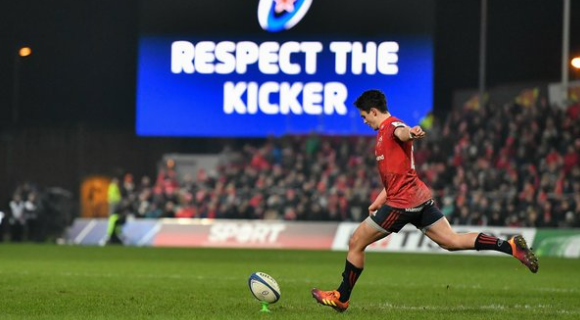 Thomond Park – The centrepiece of Munster Rugby excellence for many a Limerick native, known to many as a Fortress, especially on European nights and for very good reason. A 23-16 victory over a then English powerhouse in Harlequins in 1997 set Munster on their European journey and “The Thomond Factor” was born. What followed were special nights of hard work, grit and determination and many nights where typically, Munster found themselves in do or die ultimatums against stronger opposition.

But through the years, where players came and went, captains armbands were passed down, and new coaching ideologies applied, the team continued to not lose on their own turf when it came to the crunch. Munster have played 23 European pool matches since 1996 and have lost just 5. However, only one of those came at home to Leceister who found the extra gears to capture a rare win, 13-6 in 2007.

With those stats in mind, Munster entertained English Premiership leaders Exeter on Saturday night in front of a sell-out Thomond Park crowd. 16th Man: Munster are embraced by fans following Saturday’s dramatic win
As the home crowds echoed “The Fields of Athenry” in fine and early song, Munster knew that a losing bonus point was required a the very least to see them through in this encounter, provided they restricted Exeter to three tries or less.

Unlike previous heroics in final home pool games at Thomond Park, this one was brutal, low scoring and a highly physical game. A very hard to unlock Exeter team proved tricky throughout the night and one that included an evening full of handling errors that cost both sides.

It was the home side that cast the first stone, Munster’s Joey Carbery slotted a simple penalty in front of the posts, but Exeter replied quickly and Don Armand dotted down on 12 minutes after a well-executed lineout maul gave them the lead which Simmonds converted. Carbery’s boot reduced that lead 10 minutes later to go just 7-6 behind at the break.

A stalemate ensued for over 30 minutes of the second half, and at times Munster found themselves surviving a couple of scares as Exeter proved the more potent with the ball in hand. A pivotal moment in a relatively mundane game came when substitute Billy Holand produced a brilliant steal from an Exeter lineout very close to the Munster try-line, the Cork man fending off the most prominent threat all evening. For Munster’s part, it was their defence that delivered as well as Man of the Match Tadgh Beirne executing a series of turnovers in the second half to stop the English side’s momentum in periods of the game.

With just eight minutes remaining, Munster were illegally spoiled at the lineout, and so Joey Carbery stepped up to take the crucial penalty kick. The out-half made no mistake and stuck it between the sticks, making it 3/3 on the night and maintain his  100% record, slotting his last 20 kicks in all competitions.
More importantly, it provided Munster the safety net they needed as they entered the final minutes.

Munster leaves with their fortress intact, and an 18th European Quarter-Final awaits them away to Scottish side Edinburgh.

Meanwhile defending champions Leinster will face Ulster at home and in the European Challenge Cup, Connacht will face an away trip to Sale Sharks.